Don’t miss out on key information by hiring a local guide. Please note in the information here we didn’t mention St Johns Cathedral which should most definitely be part of a St Johns walking tour.
I took a tour today with my friend Dalston an old local salt who knows this country and St Johns well. We choose cruise ship day as I wanted to get some shots of the single ship in port today as its low season. But first a walk down a residential area showed some characterful houses and shacks. A shanty town I think Dalston referred to it, though I felt no malice but I did see some poor houses that were a bit dilapidated. We had just earlier had some bread and cheese from a local bakery on St Johns Street. The bread is a little sweet but it is one of the few inexpensive things here and I have to say I quite like it.

Walking and Segway Tours available, for those who like a more structured approach with guide.

We also checked out the museum which is worth an hour and has information on how Sugar Cane is made the slaves how they arrived were bought and sold for example and previously the islands Arawak Indians and some artefacts. Entry is 8ECD.


We checked out the ship  – its off season now so just 1 per week on a tuesday. The area around here called Redcliff quay has nice shops a casino and all you could need as a cruise ship passenger. It must be manic the moment they first get off the ship. We entered the casino and saw all the slots the card games looked like a little Black Jack.

Yours truly getting  a local haircut he kept asking me how much I wanted off and in the end it seemed he didn’t listen, but I always told him just go with what you feel – so I got a local cut, very neat and I can see around the edges where the sun didn’t get through as now I have white border !

We got some food at lunch time and today really the heavens again opened so we did our fair share of dodging it. For lunch we tried I think its called abracadabra or something like that and it serves really good local food and coffee (from ethiopia). It has a fountain with some fish in in the attractive courtyard. I had a breakfast dish which was saltfish served with some toast and boiled eggs – perfect. 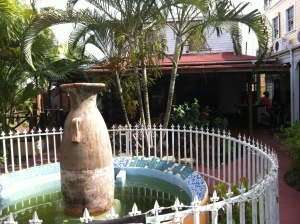 Around the market area you can find also the fish market, its by the water unsurprisingly but get there earlier than we did as the catch is mostly already gone. But you can watch the guys make the fishing cages and take a look at the charismatic boats. If you came in by Jolly Harbour you can catch the bus straight out of here direct.

You will only ever find about 10 colours in the Caribbean it seems. The fishing boats green is one that I have seen often. The stink around this area is more than a little fishy.
If you are interested in booking a guided tour please let us ask the guides for you.

Half Moon Bay – wrapping up super sunday Diving – yet again joined by sharks in Antigua.